The bond with the homeland__

For many decades the main link with the emigrants’ homeland, irrespective of the country where they had settled, was by letter, even after the telephone came into use. Millions of letters crossed the Alps and the oceans to bring families good or bad tidings, news of births or deaths, of business successes or failures.

These links are also evidenced by the “remittances” which the emigrants sent home and by the so-called “migration chains”, those exchanges of contacts and information by letter which led family, relatives or friends to join those who had already emigrated and thus find support in the early days after their arrival.

Family photos which arrived by post were prominently displayed in all emigrant houses and it was enough to enter the Little Italy enclaves scattered across the globe to see how strong the links were with the homeland, at least among the first generations of emigrants. Here they spoke Italian, ate Italian and bought Italian.

Then there were the religious rituals, above all that of the patron saint, celebrated by the emigrants ideally jointly with family who remained in Italy and who celebrated on the same day thousands of kilometres away. 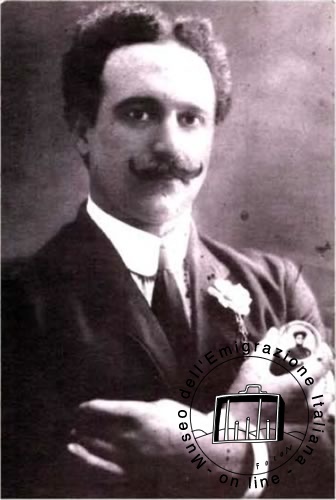 Giuseppe Piagentini pictured holding a photograph of his far-away fiancée
Manage Cookie Consent
To provide the best experiences, we use technologies like cookies to store and/or access device information. Consenting to these technologies will allow us to process data such as browsing behavior or unique IDs on this site. Not consenting or withdrawing consent, may adversely affect certain features and functions.
Manage options Manage services Manage vendors Read more about these purposes
View preferences
{title} {title} {title}