Politician and historian Francesco Saverio Nitti boldly stated that for these men, exploited to the point of oppression by landlords, and rich only in debts, the only alternatives were to become “briganti or emigranti” (2). He also hoped that emigration could become a key factor for modernisation. When returning, emigrants would “study and import” the mindset, rules and rhythms of modern times. In other words, to adapt a book title from a later age than Nitti’s, Christ might have gone on with his journey, south of Eboli (1).

In other regions, mechanized industry was leaving many skilled craftsmen and workers jobless. They moved abroad, where they could find better opportunities to achieve social and financial goals which would have been unthinkable in Italy. For these men, emigration was just one of the possible courses they could commit themselves to.

The decision to leave, which was often made at the beckoning of relatives or friends already abroad, found a further rationale in the so-called “emigrant guides”, often published by those countries which aimed at attracting labour from all over Europe. These guides showed images of earthly paradises: boundless plains with lush vegetation, clean houses, and orderly city districts.

(1) Carlo Levi, a young intellectual from Turin, was sent to internal exile in Lucania during the years of the fascist regime and that is where he wrote “Christ Stopped at Eboli”. The title was inspired by a peasant idiom, meaning that their world was still far away from history. 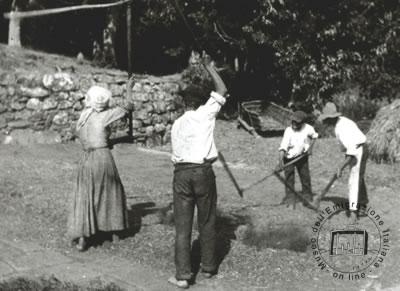 Bivigliano, Florence, early 1900s. Threshers
Manage Cookie Consent
To provide the best experiences, we use technologies like cookies to store and/or access device information. Consenting to these technologies will allow us to process data such as browsing behavior or unique IDs on this site. Not consenting or withdrawing consent, may adversely affect certain features and functions.
Manage options Manage services Manage vendors Read more about these purposes
View preferences
{title} {title} {title}